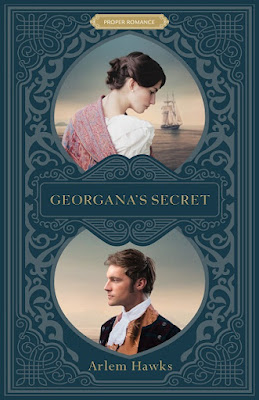 A Regency romance on the high seas. Two hearts yearning to find a safe harbor, and possibly, a lasting love.
As a young girl, Georgana Woodall dreamed of beautiful dresses, fancy balls, and falling in love. However, when her mother dies, she cannot face a future under the guardianship of her abusive grandmother and instead chooses to join her father on his ship disguised as his cabin boy, “George.”
Lieutenant Dominic Peyton has no time in his life for love, not with his dedication to His Majesty’s Royal Navy claiming his full attention. While trying to adjust to a new crew, he strives to be an exemplary officer and leader. When he sees the captain’s cabin boy being harassed by the crew, he immediately puts a stop to it and takes the “boy” under his wing.
After discovering a number of clues, Dominic deduces that George is really a woman. Knowing that revealing the cabin boy’s secret would put her in serious danger from the rowdy crew, Dominic keeps silent and hides his growing affection for her. Georgana is quickly losing her heart to Dominic’s compassion and care but is convinced nothing can come of her affection. She cannot continue to live her life on the sea, and having already missed too many seasons in London, her chances of being welcomed back into polite society and finding a suitable husband are quickly slipping away.


(Affiliate links included.)
Goodreads | Amazon | Barnes & Noble | Target | Book Depository | Deseret Book | Seagull Book
Excerpt
Georgana stumbled to the mainmast and collapsed against it. He stopped beside her,
hands on his knees and gasping for breath.
A laugh—a warm flash that split the night—spilled out as she slid down the mast to sit on
the deck. No one glanced their way, and the feminine tone was lost in the shouts of the next
round of dancers. Little droplets glinted from corners of her eyes.
He sank quietly to the floor beside her, not wanting to disrupt the scene. She drew in
gulps of fresh sea air as her peal of laughter wafted away like autumn leaves on the wind. It was
no wonder she never laughed on board. She’d mastered the facade of a shy cabin boy, but he
didn’t think she could ever mask her laugh.
She wiped the moisture from her eyes and watched the bright moon above them. He
ignored the moon and the way it tripped across the waves. Tonight he forgot the ocean. He
watched her.
His heart pounded between his ribs, and he nearly let it push him forward to kiss that
contented smile. How would it feel to have Georgana Woodall’s soft lips caressing his own? To
be wanted by someone like her would be a wondrous thing.
Dominic straightened, giving his head a sharp shake. What was he thinking? As though
he could ever conceal a kiss with three hundred other men milling about or while this close to her
father. Besides, he couldn’t see her welcoming a kiss that could compromise her disguise.
“What is it? Are you sure you’re well, Lieutenant?” She leaned toward him, face
upturned.
He needed to get out before his reckless nature took over and he did something they’d all
regret. “Yes, quite well.” 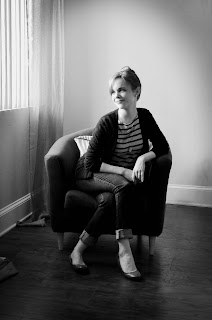 Arlem Hawks began making up stories before she could write. Living all over the Western United States and traveling around the world gave her a love of cultures and people, and the stories they have to tell. She graduated from Brigham Young University with a degree in communications and emphasis in print journalism, and now lives in Arizona with her husband and three children.