1765. Persephone Nicholas has lived her twenty years with a father she cannot stand. Secluded on their plantation, Persephone feels she has a life destined for spinsterhood. “Life is Heaven for men and Hell for women” is her mantra. But on a visit to her cousin’s wedding, she meets young Mr. Elijah Parker. Opportunities show that things can be much sweeter, and Persephone begins to question her thoughts on life. As the world continues to throw her hardships and struggle, Persephone chooses to fight and master the life she’s been handed to become Queen of the Hell she living in.

When she entered, he stood and offered a polite greeting. Away from Mr. Campbell’s side, he stood much taller with his back straight and shoulders broad. Even in her light heels he towered above Persephone.

“I would wager that we both feel out of place here,” she offered. Once again she felt his gaze look past her smile. In their closeness she felt his soft, blue eyes finding something deeper inside her.

“You seem very much at home when you dance. It appeared quite the opposite at the start of the evening,” his voice was smooth. “Despite how well you hide it.”

Persephone bit her tongue, unsure how to respond to such a frank statement. Indeed he had noticed her discomfort when they met and had kept eyes on her since then.

“I’m not sure if I should thank you or be disgusted,” she replied.

“Be disgusted if you like, but I understand just how off putting being toted around by an old man can be.” He offered her a seat and Persephone took it. Although blunt, Mr. Newbury brought an intriguing conversation.

“On the contrary, Mr. Campbell often brings me to these events to show that he’s in charge of an educated man. He sees it as a business ploy to impress potential clients.” Mr. Newbury took a seat across from her.

No one had made an appeal to understand her situation, and no one had been so forward in conversation in months. Persephone liked it.

“At least you’re not expected to go to bed with him,” she sipped her wine, surprising a smile. Mr. Newbury laughed.

“I suppose you win this competition of sympathy.” Mr. Newbury’s banter was almost more enjoyable than the turns and steps of her three dances had been. And he was easily more handsome than any of her partners.

Clearly, he was paid decently, but Mr. Newbury was not a rich man. His coat was neat and clean, but close inspection of the buttons and seams would tell you it had been worn a few times. Brown hair was streaked with whips of blonde and had been combed back and tied with a ribbon, the newest piece of clothing he wore.

“Are you planning to always work for Mr. Campbell?” Persephone asked.

“If someone hired me, I’d leave him tomorrow,” he smiled and took a sip of his own wine.

“He seemed kind, I did not picture being in his employ so terrible.”

“He is wonderful, but sometimes I feel I’ve outgrown him.” With his tall, lean stature, Mr. Newbury seemed crouched in the chair. Persephone was sure he had outgrown everything.

“Do you wish to pursue estate law?” Persephone glanced back towards the full room, hoping her absence was going unmissed.

“I suppose,” his eyes were still on her. “It’s an area I’ve noticed that is full of potential opportunities.”

“Then perhaps we can help each other,” Persephone inched to the edge of the seat, easing closer to him. “Now that Mr. Savidge is married again, his affairs will need to be sorted for me, or any children we may have.”

Mr. Newbury’s stare returned, his eyes meeting hers. For a moment he was silent, his gaze cutting into her as it had before. She felt as if he were peering into her thoughts and pulling them apart one by one to examine them. Like a doctor dissecting a cadaver, he seemed to remove every piece of her to study and understand how she worked; all with a short look.

“I’d be happy to assist you,” he replied, his examination complete. “Is Mr. Savidge eager to have children?”

“He certainly is,” she frowned. Persephone’s gentle screen had completely melted in the blunt questions. “I’m simply doing my part, as I should.”

At this Mr. Newbury leaned forward and emptied the remainder of his glass into hers. The red wine bubbled and filled almost to the brim. Small drops splashed out onto her hand, staining her gloves.

“If you are ‘doing your part’ tonight, you’ll be needing stronger wine.” 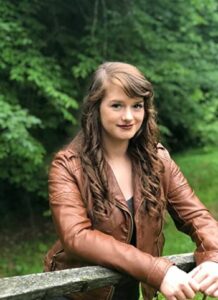 Danae L. Samms has always been a creator. Loving books, television, and being outside fueled her imagination. Her writing began when she was four with her first play, and continued to grow to a degree in journalism. Finding newspapers terrible and websites tolerable, she paid the bills as a freelance writer. Eventually, her creativity produced a novel and a thousand ideas waiting to become novels. Regularly, she keeps up with a blog of Unqualified Advice on Writing and Everything Else. The only thing she’s been doing longer than writing is horseback riding. While horse shoes were never her forte, Danae has spent plenty of time riding and training. Most of that is with her horse Maggie.

Enter to win a paperback copy of Queen of Hell by Danae L. Samms! The giveaway is open to the US only and ends on June 4th. You must be 18 or older to enter. Queen of Hell