The Professor’s Lady by Holly Bush

Meet the Thompsons of Locust Street, an unconventional family taking Philadelphia high society by storm… 1870 Kirsty Thompson is determined to begin her own business bringing beloved Scottish fabrics and yarns to Philadelphia but first she must meet the men and women who weave the plaids and spin the wool. How will she ever escape her protective older siblings and sail to Scotland? Albert Watson is a medical doctor focusing on research, especially that of Joseph Lister and his sterilization techniques. He speaks at universities in America and in England while visiting his London relatives. As he prepares to sail for just such an engagement, Kirsty Thompson boards his ship to beg him to take her with him. What’s a gentleman to do? Albert cancels his trip across the ocean to escort Miss Thompson back to Philadelphia and finds there is danger afoot for her and her family. Soon he comes to realize there is also danger for his heart, even for a man who rarely pulls his nose from a medical journal. He finds himself unable to put Miss Kirsty Thompson out of his thoughts, where they belonged, because certainly a beautiful, ambitious, and charming young woman could have no interest in him. Or could she?

“Love always has something to say. Sometimes it shouts from the highest hill, and sometimes it whispers so softly one must listen closely to hear. Do not turn away. It is a rare and precious commodity. Treasure it.” The Gentrys of Paradise Holly Bush’s historical romances are set during the turbulent and transformative years of the late 1800’s. The first two books in her newest series, The Gentrys of Paradise, released in the spring of 2017 and began with the novella Into the Evermore where readers meet Virginia horse breeders, Eleanor and Beauregard Gentry. The following books feature their children, Adam, Matthew, and Olivia. For the Brave is Matthew’s story and is the first full length book of the series. Olivia’s book, For This Moment, released in the spring of 2018. The final book, For Her Honor, is now available. The Crawford Family Series following the fortunes of the three Boston born Crawford sisters and includes Train Station Bride, Contract to Wed, Her Safe Harbor, and companion novella, The Maid’s Quarters. Cross the Ocean and Charming the Duke are both British set Victorian romances. Fan favorites stand-alone historical romance novels include Romancing Olive and Reconstructing Jackson. Holly’s books are described as ‘emotional, with heartfelt, sexy romance.’ She also writes General Fiction under the name of Hollis Bush. Holly makes her home with her husband, one happy Labrador Retriever and a clever Jack Russell rescued from the pound, and two difficult cats in Lancaster County, Pennsylvania. Connect with Holly at www.hollybushbooks.com, on Twitter @hollybushbooks, on Instagram, and on Facebook at Holly Bush. Follow Holly on her Amazon author page to receive new release updates and on BookBub to check out her reviews and get sale information. 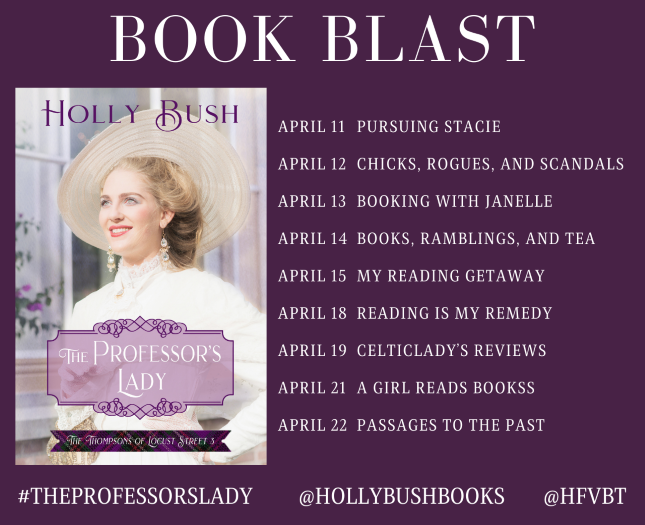