Half Notes From Berlin by B.V. Glants

Berlin, 1933. Hans believes he and his family are safe from persecution. Then, he discovers his family’s dirty secret: his maternal grandparents were Jews who converted to Christianity. Driven by the desire to understand who he is and whether his mother’s blood is tainted, Hans befriends Rebecca, the only Jewish girl he knows. Perhaps if Jewish blood isn’t evil, his mother will be ok. To be a Jew in Hitler’s Germany is dangerous. But to fall in love with one is unthinkable. Desperate to keep both his family’s true heritage and his love for Rebecca a secret, Hans attempts to navigate this terrifying new world. He’s disconsolate when his Jewish mother is kicked out of the Berlin Conservatory. He’s disgusted by his Aryan father’s aims to acquire Jewish business on the cheap. Worst, he must watch helplessly as his classmates target Rebecca with increasing violence and malice. But when his school announces it will expel Jewish students, Hans is determined to fight for Rebecca — and the lives and souls of his family. 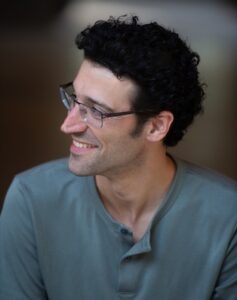 B.V. Glants was born in Soviet Ukraine and immigrated with his family to suburban New Jersey when he was ten years old. Raised on family stories ranging from his grandparents’ fight for survival in WW2 to his parents’ confrontations with Soviet antisemitism, he now lives in Silicon Valley with his wife and daughter. B.V. Glants is a lay leader at a Jewish day school, a Wexner Heritage Program member, and a technology entrepreneur, most recently having cofounded Tonic Health (sold to R1, NASDAQ:RCM) and Turnkey Labs. That hasn’t stopped him from earning an MFA at California College of the Arts and attending writers’ conferences at Squaw and Sewanee. He writes historical fiction from a Jewish perspective, focusing on how major historical events challenge and transform the lives of everyday families. Half Notes from Berlin is his first published novel.

Enter to win a paperback copy of Half Notes from Berlin by B.V. Glants! We have 10 copies up for grabs! The giveaway is open to the US only and ends on December 30th. You must be 18 or older to enter. Half Notes From Berlin https://widget.gleamjs.io/e.js